Here’s the thing about being type A: You often wind up launching the event, leading the group project, overseeing the work (and/or doing most of it), regardless of whether you want to.

Because people know you get stuff done.

But you can’t assume you’ll get saddled with everything.

In 2013, I was put in a five-person “community action team” for a service project, and we were supposed to pick a team captain in the span of like a minute.

I looked around my group’s table. I had just met these people. Nobody moved or spoke. Our captain was supposed to raise his or her hand once we figured out who that person would be.

One guy, Ralph, looked like he might be interested, but he didn’t open his mouth right away. So I rolled my eyes, said, “Oh good grief, I’ll do it” and raised my hand.

Ralph looked at me with a level of irritation that cannot be described in words. But he did say a few words. I can’t remember what they were. I just remember the taste of my foot in my mouth.

I tried to explain. It didn’t work.

“It’s not what you said, it’s the way you said it,” Ralph retorted.

Anyone who’s passed through the fires of an LGJ community service project together is pretty much bound to friendship for life. Not because the projects go badly or anything, but just because it’s hard.

And it’s meant to be.

You can apply to be part of LGJ, or someone nominates you. Once you’re accepted, the adventure begins.

The program runs basically the length of a school year, with monthly seminars on topics like healthcare, quality of life and criminal justice, all related to “greater Jackson.” The whole class attends these seminars.

But where the rubber meets the road is in your community action teams.

Our partner organization that worked at the properties wasn’t sure what they wanted us to do. So we threw a bunch of stuff at the wall to see what stuck.

More specifically, we threw pizza at the wall.

We called our sessions with the kids “Pizza ‘n Chat.” There was always pizza, and we always chatted about something: job interview skills, ACT/college prep, etc.

Attendance was hit or miss despite the free food, and we couldn’t figure out how to fix that

Then at the very end, we hit on something that worked: We helped folks with their resumés.

Most of the people we assisted were adults, not teens, but for once we weren’t just chatting: We were physically helping them improve their professional images.

The following year, when another LGJ team started working at the same properties, we told them about all the things we’d thrown at the wall, and about what stuck. And they took it from there.

That’s what I love about the leadership program: It’s never really over.

You make friends. You change (I know I did). You gain a better understanding of Jackson’s problems. You might not come up with any solutions right then, but you’re better poised to pick a problem you’re passionate about and attack it with all you’ve got.

For instance, a group of LGJ alumni started the Community Foundation of Greater Jackson, and it now holds more than $50 million in charitable assets.

So why am I writing about all of this?

LGJ just turned 30. They just came out from under the umbrella of the Greater Jackson Chamber Partnership and formed their own independent 501c3. They’re evolving, and plan to add training on nonprofit and civic leadership within the next couple of years.

And they’re taking nominations for the class of 2018.

You can nominate yourself or others. It takes like 5 minutes at lgjxn.org. Nominations are due Aug. 15.

There is tuition — which they hope to lower eventually with the help of sponsorships. Many of your employers will be willing to pay said tuition.

Leadership requires time and resources, whether at LGJ or in life in general. It’ll make you mad sometimes and work you to the bone often.

But it’s worth it. 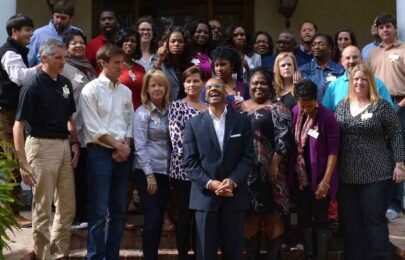 Diversity is a key role in success and leadership